The French educational system may seem confusing for expats moving to France. However, here below you will find a comprehensive explanation of the public education in France supported by a simple overview. Choosing to either enrol your child in a French school or an international school can be a very difficult decision. Several factors can play into the decision; such as the age of your child, length of stay in France and budget. International schools can be very costly. You may be looking at paying 9.000 to 24.000 euros per year for one pupil. However, it is still an option to strongly consider.

First of all, keep in mind that state schools are generally allocated according to the area in which one lives. You can ask to enrol your child in another school, however, you will have to process this request (dèrogation) with the town hall. You will have to state your reasons for wanting your child to attend another school other than the one in his/her vicinity. To register your child at a school, you need to submit an enrolment file (dossier d’inscription) either at the town hall for primary schools or to the rectorat school service for secondary schools. In the file you need to add at least the following documents:

Education in France is compulsory from the age of 6. Before education becomes compulsory, parents usually place their offspring in nurseries or ‘crèches’ as they are called in France. Infants can be registered at crèches from 2 months to 3 years. Crèches are generally funded by local authorities, however, parents may be required to pay an additional fee. There are 3 types of crèches in France.

Education in France is compulsory for all children from 6 years to 16 years. Primary school in France covers pupils from 6 to 11 years with 5 courses of study. Primary school, also known as école Primaire or écoles élémentaire starts with CP and ends with CM2 as shown in the table below. École Primaire covers the equivalent of British Years 3 to 6. Pupils must receive twenty four hours of instruction per week according to the law. English is one of the languages that can be taught in primary school, however, there is no guarantee that it will be taught throughout the 5 years. The teachers have the power to decide which foreign language will be taught in their classes, so, it could be English in one year and Spanish in the next.

Further education or secondary education in France is referred to as Collège consisting of four levels as illustrated in the table below. At the end of Troisième, students or pupils pass an exam called the diplôme national du brevet. They can then decide to attend one of the 3 types of high schools in France: 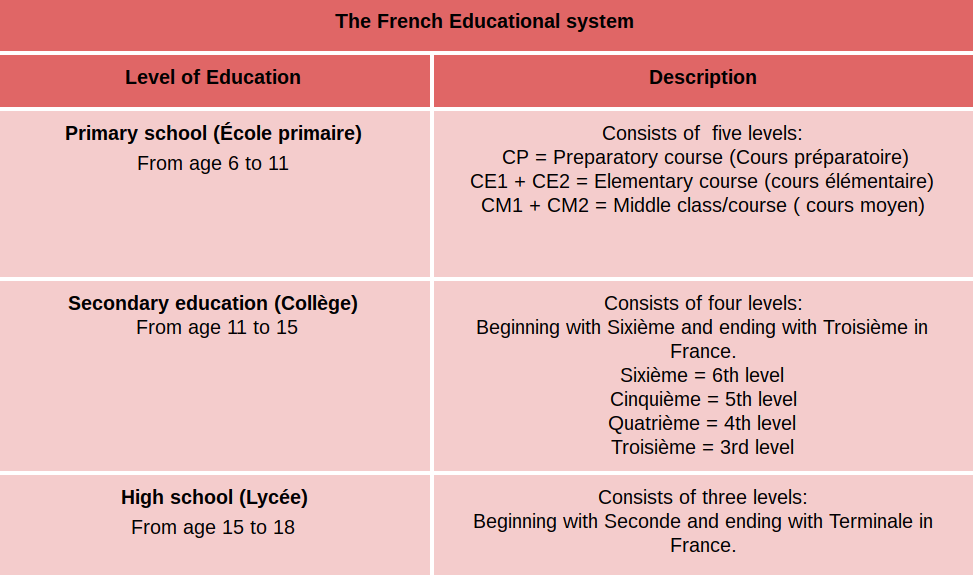 The Lycée prepares pupils for baccalauréat qualification also known as “Le Bac”. The baccalauréat can lead to higher education studies or directly to professional life. Some terms you will encounter in France are Bac+2 or Bac+3 which simply indicate the number of years of study a student did following the Baccalauréat. Here below you will find the general number of years of study following Le Bac and its corresponding certificates.

Also check our moving to Paris page and our blog page for example about Lyon. Want to get an idea of how much your move to France may cost? We got you covered! Fill in our quote form and receive up to 5 quotes within days.